Hello, my friends! I hang my head in shame and stand before to you confess that I fibbed... a teeny weeny one. I brazenly announced yesterday that there will be no more cards from me in April. Not true. Here I am ... again ... with another card. But I promise you this will be the last for April ... Guide's honour! I simply could not resist getting in the sand-box with MojoMonday. Sketch 239 is soooo cute, I just had to make it. And then there's the colour challenge over at CR8FN #53 - cute colours, I simply couldn't look away. I'm have no self-control and easily fold in the face of temptation. So here it is... 3 Kitkats later,  a happy marriage called CR8-a-Mojo! 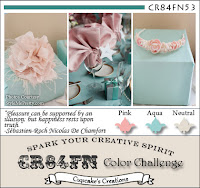 Thanks for dropping in on me today. I promise you this is the last you'll hear from me this month! See you in May!


Blogged to:
4 KitKat, 1 cappuccino and 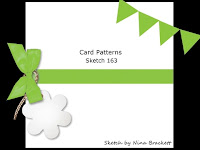 Happy Sunday, dear friends! April is all but over and I suspect this will be my last card for the month. I'm closing with something sweet and pretty...in my humble opinion, at least. The weather has been kind; ungrudgingly bounteous. Why? Nary a drop of rain all day! On the contrary, we've had sunshine all day. As you can imagine, my elation is beyond description, and with my spirit abloom, I made this floral number, befitting a sunny spring day. The sketch is from Card Patterns #163 and the recipe is from Basic Grey Challenge #67. For inspiration I turned to CES Challenge #83 "Candy & Cupcake" and Raise the Bar #102 "Lei" led me to add the floral garland. Divas by Design Challenge #32 is all about buttons and bows, so I'm taking my card to party along with them.


Swing by Make It Monday #87 for some truly spectacular cards and other crafty creations.

Thanks for hanging out with me on this glorious Sunday. I'm going to sit out in the garden, enjoy the sun and listen to some music. Hope your Sunday is equally blessed. Until tomorrow, my friends.

Happy Saturday, dear friends. Torrential downpour! The heavens are chucking down buckets load. And to make it a truly special spectacle we have thunderous orchestra and electric illuminations! Perfect day to hide under the covers. But what do I do? I make a card of course! Truth be told, I made this yesterday when the world was calm and quiet. Using the sketch from Just Add Ink # 115, colours from ColorQ #143 and a little avian inspiration from CropStop #69,  I coughed up this little birdie card. 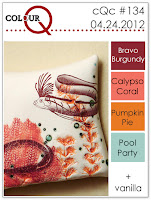 This rain is relentless! Not a huge fan of tropical storms, much less when they take place outside the tropics. I'm posting this in a flash and running back to seek refuge under the bed with the rest of the furry fugitives! Thank you so much to dropping in on me today.  And don't forget to take at peeks at the crafty goings-on over at Make It Monday #87.

Email ThisBlogThis!Share to TwitterShare to FacebookShare to Pinterest
Labels: Friendship

A Little Thank You

Hello hello, dear friends. I'm feeling chipper today. Oh the sweet smell of the weekend is wafting in. Can you smell it too? Without further ado, let me show you my wee thank you card. I've used Skipping Stones Sketch #125 for this card which I made for my book-club buddy. She's a dear friend who tirelessly picks me up for our fortnightly meet. And she has good reason to: together we unwind to a couple of Tequila Sunrises after the book-bashing session. Oh the little pleasures in life...

Thanks for dropping by. I do apologise for the dismal quality of the photos. The weather is so gloomy, and I depend on the sun for light... See you soon!

Email ThisBlogThis!Share to TwitterShare to FacebookShare to Pinterest
Labels: Thank You

Happy Tuesday, fellow bloggers! Another grey gloomy day here, which begs the question "Who stole Spring?!" Looking at the sky...anything could happen: rain, hail, blizzard, but one thing's for certain... there will be little or no sun today. However, over at the funny farm it's business as usual. In the conservatory where I sequester myself to indulge in my vice (several vices, actually) I've been busy, sedulously so, one might say!  I won't give away too much but here's a product of one vice: a card fashioned on this week's MojoMonday Sketch #238. I made this for my nephew who will be celebrating his 6th birthday in a couple of weeks. Really not sure what Nick's into these days, I just hope he has outgrown his passion for pink hand-bags! (I kid you not.) In the meantime I'm sending him an unequivocal masculine card to celebrate the man-child in him... and perhaps he can be persuaded to pick-up a jackhammer instead!

Thanks for dropping by.  I'm going to stare at the sky for a bit. Those billowing dark clouds look like they are about to burst.

Blogged to:
Hershey's Kisses, coffee and

Happy Sunday, dear friends. This is a  quickie post to show you a card I made for Waltzing Mouse Sketch Challenge #94. Yesterday I went out on a limb: experimented with bold colours and made a blinding card. Today is quite the opposite. I began the day in a slothful contemplative mood (yes, it's possible!) and decided to play with some old toys: soft pastels.  I really like this week's sketch, which made light work of the card. A peaceful relaxing end to a hectic week... perfect!
That's my card for today. I'm quite pleased with the way it turned out. I'm especially chuffed that no man or animal was harmed in its production!  You'll find this card sitting pretty over at Raise the Bar #101 where Cloudy Skies is taking centre-stage and Make It Monday #86 where is no shortage of cool cards!

Until next time, have a blessed Sunday! 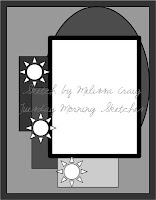 Helloo there! The weekend is here and I finally have time to get crafty. It's been a hectic week... I know I said the same thing last week. But it's true, the days seem to be zooming by and before you know it we'll be in May. I managed to make a card today. It's a card I apparently "offered" to make for a colleague. He's dating this gorgeous lady from Angola (or is it Mozambique?)  and he's completely smitten. She has such a bubbly personality its impossible not to feel upbeat in her company. She's also very colourful - and I mean that literally and figuratively! Her fashion choices are not dictated by the seasons. My love-struck friend wants to give her a card, a bold, cheerful love-token that reflects her exuberant personality. Some where between his enthusiastic gushing and my intermittent "hmmm", "aahh" and "oooh", I allegedly volunteered to produce one for him. I must have drifted into a coma when he began to rhapsodise about her because I certainly don't recall committing to such a charitable act! Anywho, this grouchy ol' hag won't stand in the way of true love. I'm using the sketch from Tuesday Morning Sketches #142.

Admittedly, I'm don't veer towards the bold and boisterous, but it's nice to work outside one's comfort zone... occasionally. Now I urgently need to start on something more subdued to get my zen back! In the meantime, swing by Make It Monday #85 and check out the fab creations on display.

Thanks for stopping by. I'll leave you with a couple of photos of André, my 10-year old baby boy. Took him to the vet yesterday for his monthly bath. He's a very private chap and bath-time photos are not easy to snap!   See you soon!

Blogged to:
André's after shower nap, pretzels and 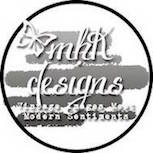 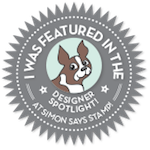 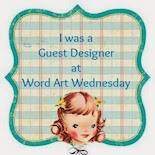 Tag You're It Guest Designer 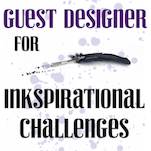 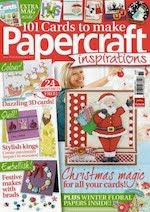 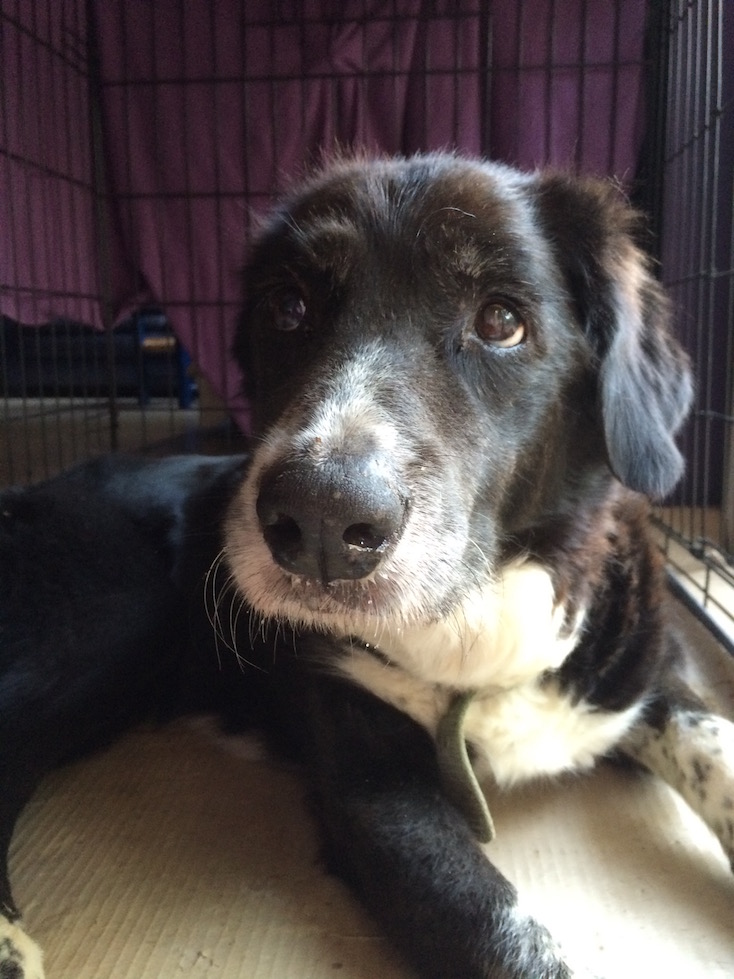 "...what we have enjoyed we can never lose... all we love becomes a part of us" - Helen Keller 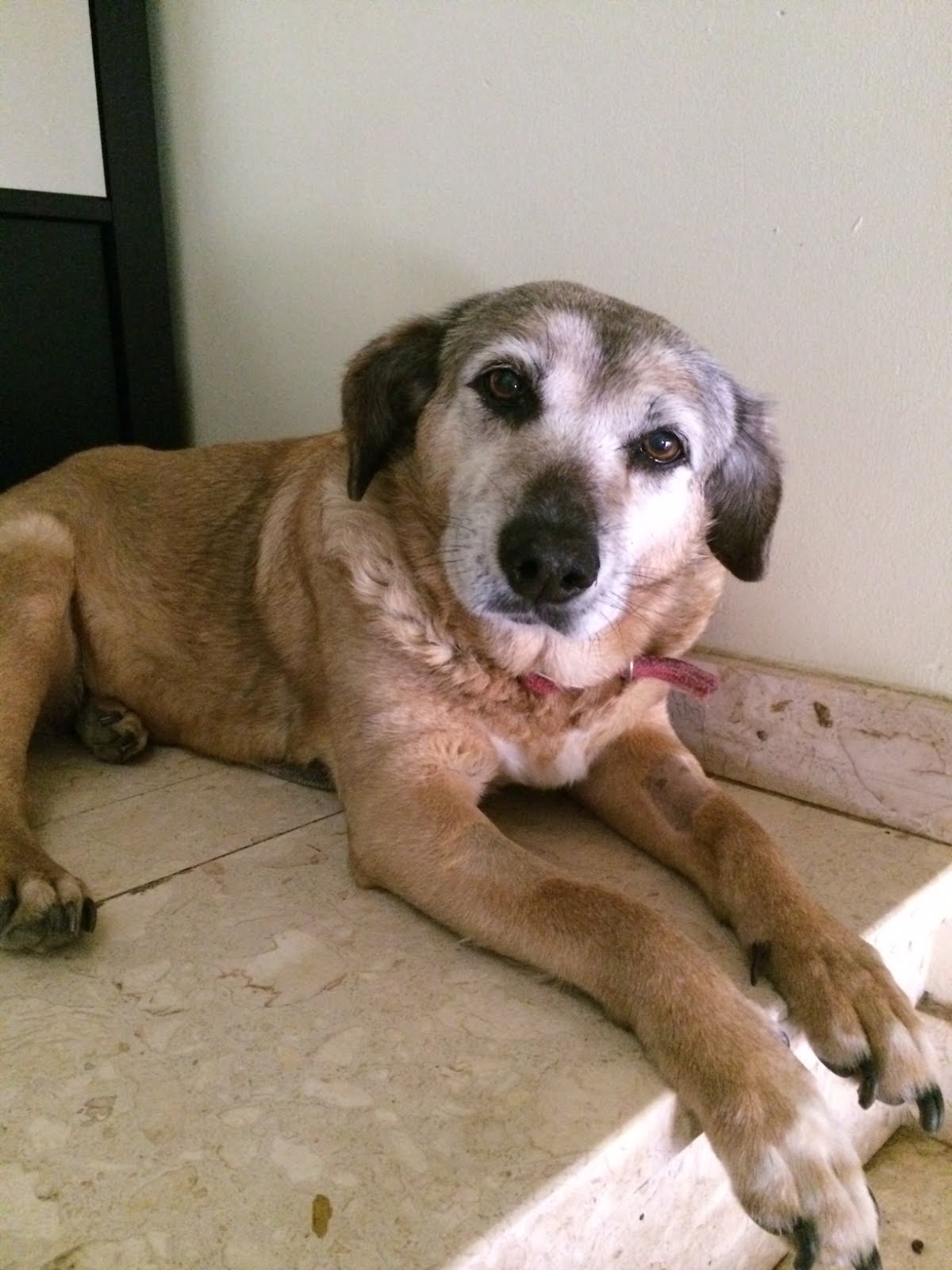 "If there ever comes a day when we can't be together, keep me in your heart I'll stay there forever." AA Milne (Winnie the Pooh) 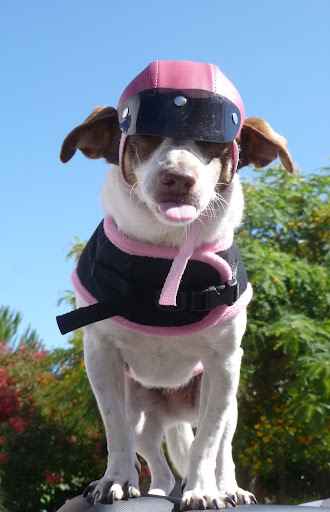 "Dogs' lives are too short. Their only fault, really" - Agnes Sligh Turnbull 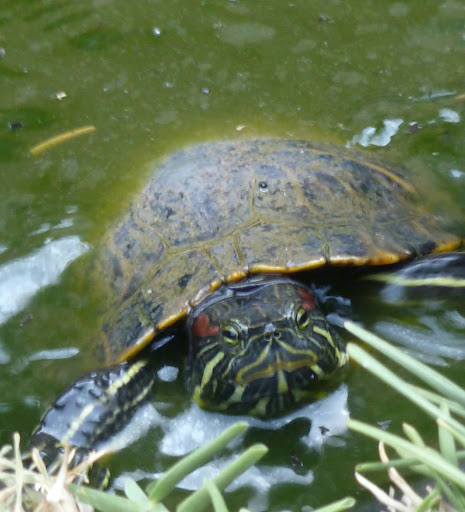 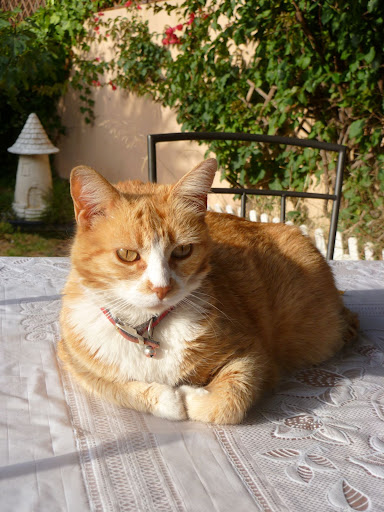 "If love could have saved you, you would have lived forever."